Dance International Foundation is a world renown performing school whose mission is to promote and perpetuate culture through dance and the Filipino martial arts called Escrima.  Most of Escrima moves resemble dance forms and today the emphasis is more on the promotion as an art form that is to be preserved and perpetuated by future generations.

The founder and instructor of Dance International Foundation, Madelyne Pascua is a certified dance choreographer and has a first degree black belt in Doce Pares Escrima. Her grandmaster and primary instructor is Supreme Grandmaster Dionisio Canete from Cebu, Philippines.

She continues to expand her knowledge and training in Filipino dance, martial arts and culture by traveling to the Philippines annually.  The dance troupe was invited to perform at the 14th WEKAF tournament in Cebu in July 2016, with a victory of being chosen to host the 15th WEKAF tournament in Maui on July 2018.

Escrima, also known as Arnis, is a weapon-based martial arts that is native to the Philippines.  It is a combination of Chinese, Indonesian, and Malaysian art forms brought to the Philippines by early settlers and traders. It was brought to Hawaii by Escrimadors who came as Sakadas to work in the sugar plantations.  Using sticks, knives and hand to hand techniques, Escrima is considered a complete martial arts.

Doce Pares was founded in 1932 by a group of 12 masters headed by Eulogio Canete.  All the founding masters brought and introduced into the organization their own individual style of Escrima.  All these styles now form an integral part of the Doce Pares “Multi-Style” system. 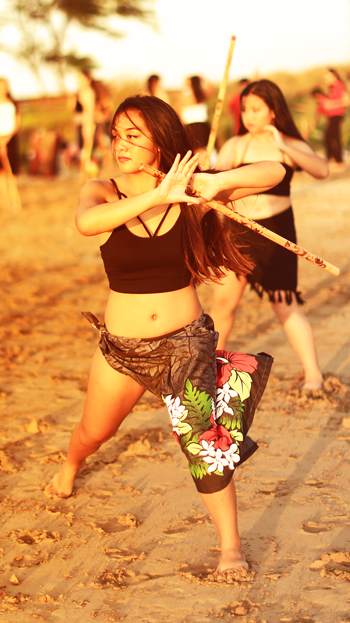